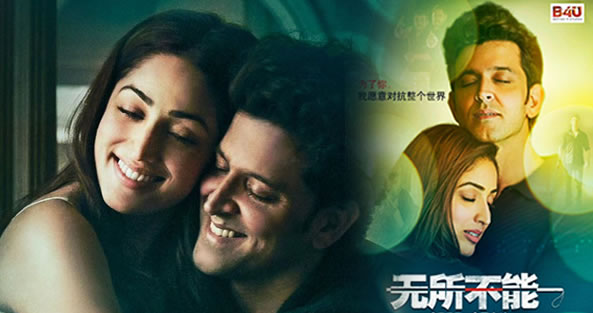 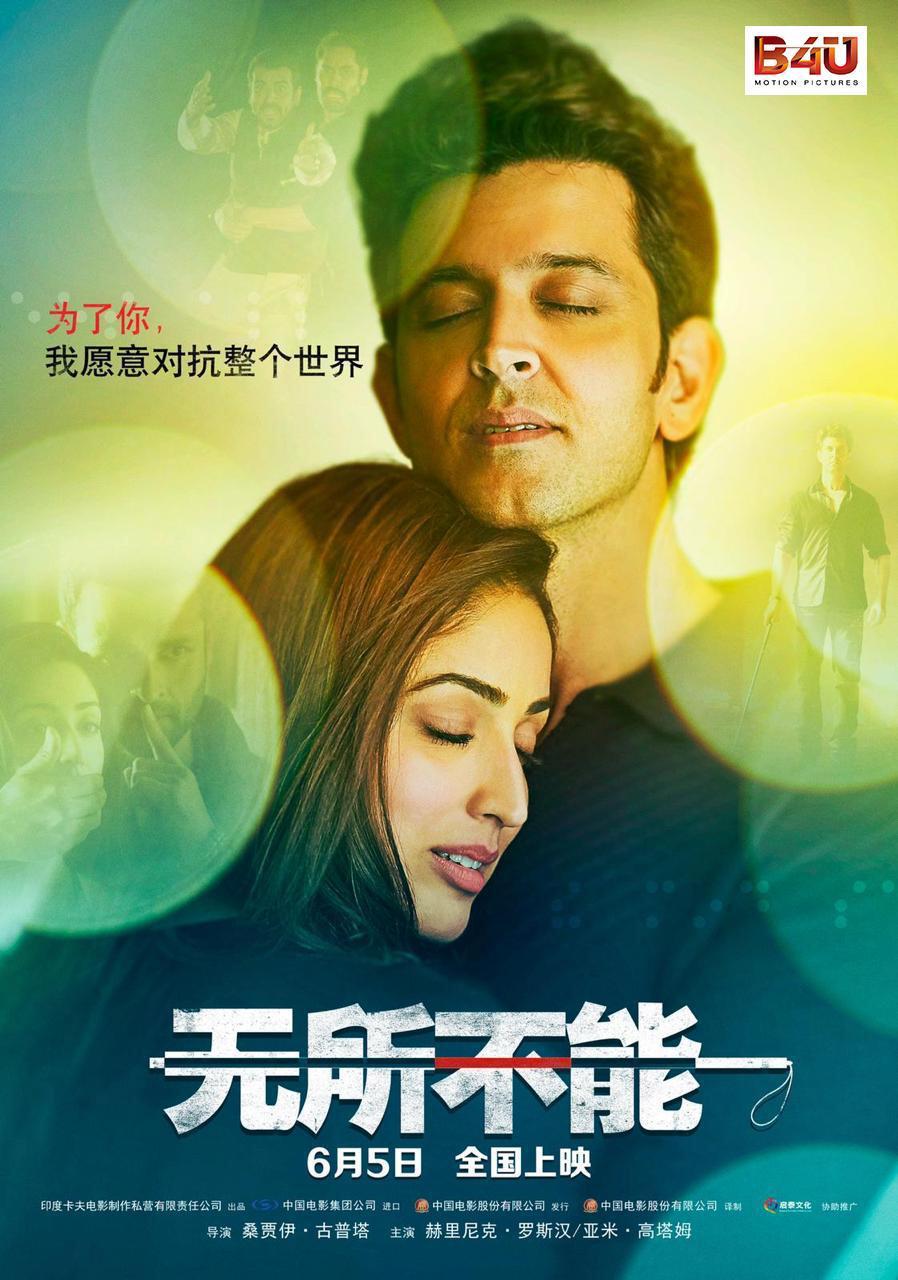 Kaabil is a 2017 Indian Hindi-language action thriller film. directed by Sanjay Gupta, written by Vijay Kumar Mishra, produced by Rakesh Roshan under his banner FilmKraft Productions It features a love affair between two blind people, played by Hrithik Roshan and Yami Gautam. It is releasing in China on 5th June 2019.

Plot: Rohan Bhatnagar (Hrithik Roshan) is a kind, happy young man who has been blind since birth and works as a voice-over artist for a living. Through friends, he meets Supriya Sharma (Yami Gautam), a working woman who is also blind, but proudly independent. The two fall in love and get married.

One night, on their way back home after dining out, they are interrupted by Amit Shellar (Rohit Roy), a local goon and younger brother of Madhavrao Shellar (Ronit Roy), a well-known politician. He and his friend Wasim, drunkenly misbehave with the couple, enraging Rohan, and they have a heated exchange.
The next morning while Rohan is at work, Amit and Wasim sneak into the house and gang rape Supriya. A horrified Rohan immediately calls the police; Officer Chaubey advises him to get his wife medically examined in 24 hours to prove the assault. While Rohan and Supriya are on their way to the clinic, they are kidnapped by Shellar's men and held captive for 36 hours. After being set free, Rohan and Supriya are criticised by police for the delay in getting Supriya clinically examined, and both are accused of being liars. Heartbroken, they return home. Supriya attempts to live normally but Rohan becomes silent and introspective, which hurts her.
One morning, Rohan returns early from work to apologise to Supriya for not being as supportive as he should have, only to find her corpse, hanging from the ceiling fan. Madhavrao visits Rohan and reveals that his brother Amit raped Supriya not once but twice. Rohan finds Supriya's braille note, which ascertains that Amit had raped her a second time; this second assault led to her suicide. Shattered, Rohan changes. He implies to Officer Chaubey that he will avenge his wife's death, challenging that Chaubey will know who did it but will be able to do nothing about it, just like he did nothing about Supriya's rape.
Rohan uses his voice modulating skills to lure the culprits to places that Rohan knows well. First, he tricks Wasim and hangs him, leaving Amit's handkerchief behind to frame Amit. He then lures Amit to the warehouse where he and Supriya were held captive for 36 hours. He finds Amit by scent, tying him down to be burned alive in an explosion.
Officer Chaubey suspects Rohan for Amit and Wasim's murders after remembering his challenge, and puts him under house arrest. It is revealed that Chaubey knew Amit raped Supriya but did nothing after Madhavrao bribed him. Rohan gets past police with the help of his friend, and calls Madhavrao to a building under construction that was to be Rohan and Supriya's new home. There, Rohan kills him and makes it look like a suicide. Rohan later relates the story to Chaubey: he made it look as if Amit killed Wasim, then Madhavrao committed suicide due to the pain of Amit's death. With no evidence against Rohan, a blind man, Chaubey stands helpless. Rohan, his revenge complete, scatters Supriya's ashes at sea.

Rohan Bhatnagar (Hrithik Roshan) is a kind, happy young man who has been blind since.. more...

Film is set in the backdrop of Money, Power & Business. largely based on the Stock market. more...
Home / Movies /Kaabil (In China)