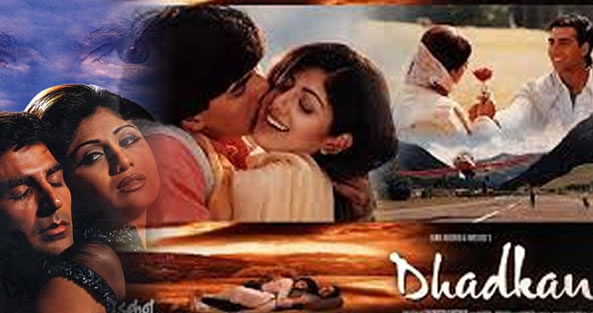 Dhadkan is about Anjali (Shilpa Shetty), a young woman who hails from an extremely rich and influential family. Her father Mr. Chauhan (Kiran Kumar) is a renowned businessman and has many dreams for his daughter. Anjali is in love with Dev (Sunil Shetty) who is very poor and often cannot even afford to clothe himself properly. Dev loves Anjali and wants to marry her — so he has to meet her father.

When Anjali puts forward to her parents the proposal of marrying Dev, she is rebuked and gets an outright refusal. Moreover, her parents have chosen for her a wealthy suitor from Delhi. Not wanting to hurt her parents Anjali finally gives in and marries Ram (Akshay Kumar) who her parents believe will be a perfect match for her.

Ram is a man of great ideals, who believes in giving a rightful place to his wife and respects her sensibilities. Despite this, he is unable to win Anjali’s love at first and their marriage remains on the edge. However, after seeing the magnanimity of her husband’s heart in forgiving and accepting her, she realises she has fallen in love with him.

Anjali leads a life of bliss and becomes an ideal wife. But suddenly, at their third wedding anniversary party, Dev returns and reveals his intent of winning Anjali back. Dev is now a wealthy businessman, and Anjali finds herself at a crossroads where she has to fight for her husband with her former love. Anjali is in love with her husband and has no wish to return to her former lover. When she tells him this, he sets out to ruin Ram's business. But the truth wins in the end when Anjali tells Dev she is pregnant with Ram's child. Dev realises his folly and decides to marry his friend and business partner Sheetal Varma (Mahima Chaudhary) who has secretly loved him for a long time.

The story of Chakra Ka Rakshak revolves around a mass robbery that happens on.. more...

An alcoholic professor is sent to a juvenile school, where he clashes with a gangster,.. more...
Home / Movies /Dhadkan