Taapsee Pannu opens up on featuring with SRK in Dunki! Fri July 01st, 2022 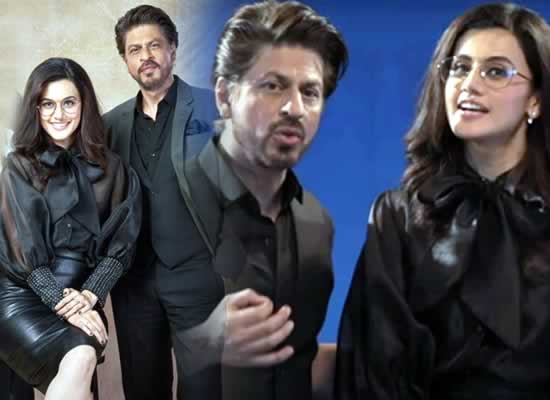 Bollywood actress Taapsee Pannu has proved her mettle in numerous films. Now, she will soon be uniting with Shah Rukh Khan in the forthcoming movie Dunki, directed by ace filmmaker Rajkumar Hirani. Taapsee, who happens to be SRK’s fan, is quite thrilled about the collaboration.
Recently, Taapsee expressed that getting to share screen space with Shah Rukh Khan is a ‘golden opportunity’. “When you end up getting the opportunity to work with him, it becomes the golden opportunity. And combine with the fact that it is going to be directed by Rajkumar Hirani, whose films are classics, it doesn’t get better. I don’t know how will I even ever up it,” the Mulk actress specified.
She further added that like Shah Rukh, she too belongs to Delhi, and so, the superstar’s journey in showbiz feels personal. “I don’t miss the opportunity to tell him every time that he is someone who we consider very personal. Even before I met him, his journey felt too personal because of how he started and built an empire for himself,” she told.
Talking about Dunki, the social comedy will explore the issue of illegal immigration from India to countries like Canada and USA through backdoor routes called ‘donkey flights’. Apart from Shah Rukh and Taapsee, the film also features Vicky Kaushal and Boman Irani in key roles.
The film is scheduled to release on December 22, 2023.