Shruti Haasan to share a glimpse of her 'shoot day' amidst lockdown! Thu July 02nd, 2020 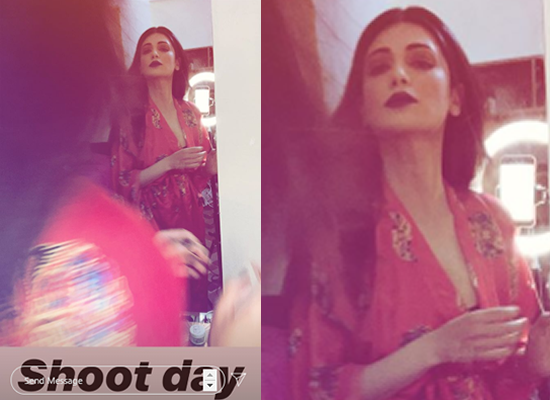 Shruti Haasan is one of the most active actresses on the social media. She enjoys a huge fan following on social media. She also keeps on posting fascinating stuff on her personal handles from time to time thereby grabbing attention.
Numerous stars have resumed shooting after the government authorities decided to grant relaxations on the same. Shruti Haasan is also among them, Recently, Shruti has given a glimpse of her busy shoot day on her Instagram handle which is worth a glimpse. Shruti is seen admiring herself in front of the mirror as can be seen in the photo. She is wearing a red floral kimono and her makeup game is on point as usual.
On the film front, Shruti is presently awaiting the release of Krack in which she has been paired up opposite Ravi Teja.